Tata Consumer Products (TCPL) is the latest company to enter the plant-based meat segment in India. TCPL has launched a brand called Simply Better – which includes range of ready-to-cook (RTC) products, made of plant-based meat.

The RTC range is a mix of snacking dishes and traditional Indian dishes. It includes plant-based chicken nuggets, chicken fingers, chicken burger patties and Awadhi seekh kebabs. All these plant-based products are currently available on Amazon Prime and Flipkart.

According to a report by Research and Markets, the Indian meat substitutes and mock meat market is estimated to reach over USD47.57 million in value terms by the end of FY2026 and is forecast to grow at CAGR of 7.48% during FY2021E-FY2026.

Devangshu Dutta, chief executive and founder at Third Eyesight, a specialist consulting firm, mentions that the presence of Tata Consumer Products and ITC could help in increasing adoption of the category over time, since both are large players intending to scale with mainstream customers.

“However, both companies will be advertising and targeting the same cohort of customers. Additionally, the two will also be competing against the multiple D2C brands in the category,” he added.

The plant-based meat market, or smart protein market, includes D2C brands. Some of these brands are also backed and endorsed by celebrities and athletes. The Good Dot is endorsed by Olympic athlete Neeraj Chopra, cricketer Virat Kohli and his wife and actress Anushka Sharma have invested in Blue Tribe and actor-couple Riteish Deshmukh and his wife Genelia Deshmukh have invested in plant-based meat startup Imagine Meats.

Anchit Chauhan, AVP – planning, Wunderman Thompson, mentions that the plant-based industry has been built by a set of startups, and now Tata has decided to enter the segment – somewhat late.

“If you look at the e-commerce segment too, Tata entered late with Tata CLiQ, almost 10-12 years after the e-commerce category had been built by the likes of Amazon and Flipkart. But the advantage Tata has is that the trust factor will always be associated with it. It will be able to leverage that brand equity and create success out of it.”

Dutta points out that for years, the most popular plant-based meat product had been Ruchi Soya’s product – Nutrela’s soya chunks and granules (soya chunks available at Rs 499 for 200 grams and granules at Rs 250 for a kilogram). Soya chunks have been available in India since the 1980s and Dutta calls it the ‘poor man’s meat replacement’.

He says that Indians already get protein in their diet through lentils, pulses and beans, and even those who consume non-vegetarian food don’t do so on a regular basis.

“They may eat it once or twice a week. Some people who convert from non-vegetarian to vegetarian, don’t miss the taste at all. Protein isn’t a huge selling point for these products either. So, this specific faux meat segment in India is a niche market.”

Both analysts (Dutta and Chauhan) opined that Tata’s entry into the segment would not have significant impact on the way the products are priced in this category.

According to Chauhan, India is mostly a vegetarian country and the consumers who may opt for plant-based products are ones who may do so out of concern for the environment, love for animals or an overall healthier diet. Reasons for turning to plant-based meat

“Plant-based products are essentially for non-vegetarians, who have a certain taste but are willing to give it up because they feel for the environment or animals. But that’s a very urban niche right now. If you’re a ‘woke’ urban consumer, the price point of the products may not matter,” says Chauhan.

“One of the factors for this segment to grow in India is availability. Whether it is a startup or a company as big as Tata or ITC, it has to have financial muscle to sustain growth and must be easily available to consumers. Visibility and user trials are important, especially to attract consumers who wish to make a lifestyle switch in their diet. That’s why modern retail is an important channel for these products,” Dutta adds. 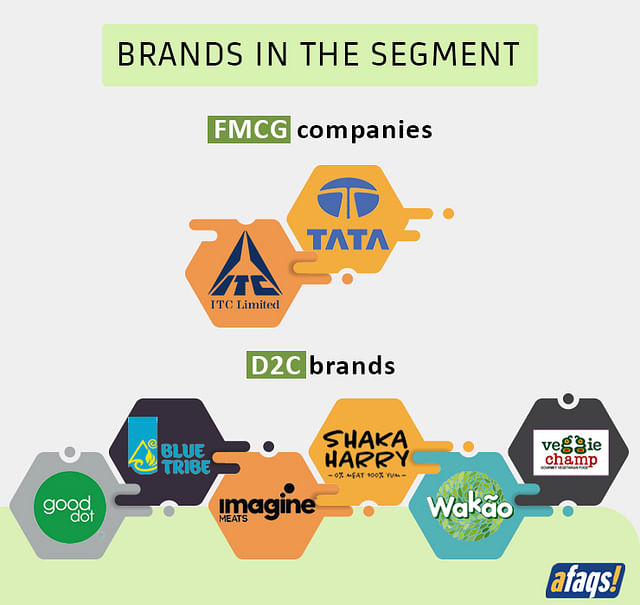 Dutta explains fundamental consumer behaviour and calls expansion in this market ‘tricky’, since it is difficult to get people to change their behaviour.

“This is even more the case in smaller cities and towns, where people may have a more traditional mindset. Take the example of Kelloggs – it has been in the country for almost 30 years and there hasn’t been a mass behaviour switch as far as breakfast meals are concerned.”

Chauhan adds that it is not just plant-based meat, there is now demand for alcohol-free products – which taste the same as alcohol but do not have any of the side effects that come with drinking alcohol.

Dutta mentions that people in Tier-II and III cities may not be aware of plant-based meats. This is a tricky category that requires a lot more development. “It’s possible that plant-based meats will remain an urban phenomenon for a long time.”