Simran Lal and Raul Rai’s Nicobar stands with a distinct identity among home-grown fashion and lifestyle labels through a blend of Indian sensibilities with functional aesthetic.

When Simran Lal and Raul Rai—co-founders of the fashion and lifestyle brand Nicobar—celebrated their 12th wedding anniversary recently, the two had a rather insightful chat. “Simran asked me to rate how the past 12 years have been. My reaction was, let’s keep it upbeat,” Rai says with a laugh.

“She [Simran] wanted both of us to point out 12 things that stand out in our minds in the past years as a couple and why. And how we would like our next 12 years to be like together. I said it’s a bit of a risky plan,” Rai laughingly admits, but he is fully aware that even on a professional level, the husband-wife duo maintains a similar approach: long-term perspective. In the past three-and-a-half years, the couple has built Nicobar with a distinct identity among home-grown fashion and lifestyle labels, blending Indian sensibilities with functional aesthetic. The New Delhi-based brand has actively engaged with local artisans and the larger design community to build a contemporary product line across fashion, home, and travel accessories.

Harper’s Bazaar India editor Nonita Kalra says the brand embodies the contemporary aesthetic of India. “It is rooted in heritage, but is in equal parts playful and hyper creative. Your classics come with a twist. It is all these things that work in its favour. Plus its pricing is just aspirational enough to know you are getting top quality,” says Kalra. Today, Nicobar has 15 stores across the country, including four pop-up stores [temporary storefront space] in New Delhi and an active online platform contributing 25% to its total sales. The business also has a strong overseas presence, shipping merchandise to more than 200 countries.

Rai is clear about building the brand and scaling up. “In my view, Nicobar will be more than 10x-20x its size over time, but it could happen either in five years or 10 years. I am in no hurry,” says the 50-year-old co-founder and CEO. Rai does not disclose the financials of the company, but he reveals that the company does about 250 orders a day across categories, with an average order value in the range of ₹6,000-₹7,000. It typically sells about 800-900 products a day, including all its stores and the online platform. 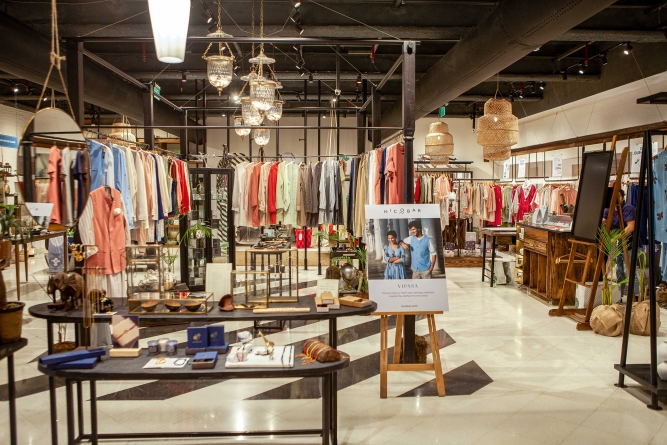 Each of Nicobar’s stores reflects the brand’s aesthetic: minimal, simple, and modern.

According to financial documents filed with the Registrar of Companies, Nicobar Design Pvt. Ltd recorded a loss of ₹3.2 crore, while its total revenue stood at ₹7.2 crore for the period between June 5, 2017, and March 31, 2018. However, Nicobar is aiming to break-even during the October-December quarter this year. “We will generate money. We want to grow it profitably. We have had profitable months in the past,” says Rai, pointing out that it takes ₹50 crore-₹75 crore over a period of about five years to build a business of this nature.

The Lal family’s entrepreneurial journey began in 1948 when Goodearth Company was set up by Lal’s grandfather (Man Mohan Lal) to sell and service imported tractors. He later partnered with German firm Eicher to venture into tractor manufacturing. In the 1960s, her father Vikram Lal joined the family business and in the early 1980s it was named Eicher Goodearth. The billionaire Lal family owns automobile company Eicher Motors Limited (EML), the maker of popular motorcycle brand Royal Enfield.

Eicher Motors nearly sold off Enfield because of its mounting losses until Lal’s brother Siddhartha Lal turned around the company’s flagship motorcycle business in the late 1990s when he was in his twenties. For FY19, EML posted a net profit of ₹2,203 crore on a revenue of ₹9,797 crore from the motorcycle business alone. Despite Lal’s enviable business lineage, she says she never saw herself as an entrepreneur. “I stumbled upon it and since then have tried to learn and grow,” Lal says. “But today I do see myself as a creative entrepreneur.

After finishing a master’s in art history at Bangalore University, she did a product development course at the Fashion Institute of Technology in New York and joined her mother’s venture in 2002. She worked in different capacities, streamlining the supply chain and merchandising operations of the retail business, before becoming the CEO. Today, Good Earth has 10 stores across the country and retail partnerships in Turkey’s Ankara, Singapore, and China with a presence across the fashion, home, and wellness categories. Rai learnt the fundamentals of business during his days in investment banking and private equity. The Harvard Business School graduate’s stints at Goldman Sachs and General Atlantic in New York and London taught him the importance of mentorship, culture, and long-term focus. 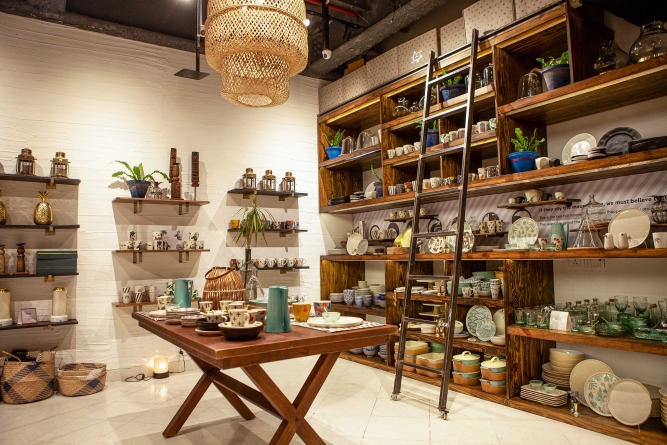 When the couple was planning Nicobar, the challenge was to create a signature different from Good Earth for it. It was a busy time for Lal. She was running Good Earth and “was launching Nicobar simultaneously”. “Good Earth… was the culmination of all the years of learning. Then of course came Nicobar with all its madness as a startup with large dreams. It was a time of growth, change, and multitasking. Apart from co-founding it, I was the creative director of the brand which was very energising,” says the 48-year-old.

Today, Lal has her hands full as she juggles her work commitments across brands. Last year, Good Earth launched Paro, its sub-brand focussing on well-being and personal care. Paro is set to open a wellness retreat in the Himalayas soon. Despite being from the same stable, industry experts say Good Earth and Nicobar look nothing like each other. “If you didn’t know they have the same background it would be impossible to say that they have anything in common,” adds Kalra. Devangshu Dutta, chief executive of retail consultancy Third Eyesight, concurs. “Nicobar has a different position from Good Earth because the product profile is quite distinct. A consumer isn’t concerned about whether brands have common ownership and, if so, whether they should look alike or different.” Dutta feels each brand needs to ensure that it is distinctive, relevant to its target consumer group, and consistent in its brand attributes, be it product, pricing, store ambience, service, or communication.

Today, each of Nicobar’s stores reflects the brand’s aesthetic: minimal, simple, and modern. While it is headquartered in South Delhi’s Chattarpur, it opened its first store spread over an area of 2,000 sq. ft. in March 2016 in Mumbai’s artsy Kala Ghoda area that houses galleries, cafes, boutiques, and designer stores in renovated heritage buildings.

The India diaspora across the world is a potential catchment…the challenge here is to workout the systems and logistics to ensure timely availability and service at a reasonable cost.

The brand’s flagship 2,700-sq. ft. store is located in The Chanakya, a luxury mall in New Delhi. While the investment in setting up a store varies based on the location, rentals, and others factors, Rai explains that a store with a size of about 1,500 sq. ft. would cost between `50 lakh and `1 crore. The couple laid the groundwork for Nicobar a year and a half prior to the launch of its first store. It started putting together a team from 2014. Rai and Lal spent the first three months meeting candidates to get the right team. After 250 meetings, nine were hired.

Aparna Chandra, design head (clothing) at Nicobar, says when Lal and Rai met her to discuss her joining the team, they said they were trying to create a brand that would be spearheaded by conscious design and constant improvement. “The brief was to create beautiful, functional pieces. When they asked if I would do Nicobar, I said yes almost immediately. Their style sensibility and ethos was right up my alley: simple, clean, relaxed. I knew that they were the ones I wanted to do this with,” says Chandra.

Besides Chandra, the core team includes Divya Kapoor, design head for the travel vertical, and Arya Nerker, who heads design for the home segment. Kapoor has worked with British home-furnishings retailer Cath Kidston and London’s Selfridges prior to Nicobar; Nerker has spent a considerable part of her career as a brand and home designer for Good Earth. Nicobar is mindful of its sourcing, using more of sustainable fabrics and materials such as organic cotton, bamboo, and tencel (cellulose fibre found in wood pulp). Currently, its warehouses are 85% plastic-free. The company is looking to double its footprint over the next two-three years, adding four-five stores a year. It is also not ruling out international expansion. “We always wanted to create a culture and a brand for the long term. Rooted in India, yet globally relevant,” says Rai.

Dutta points out that Indian brands tend to get pushed into niches but as the number of customers that are both discerning and have the ability to spend grow, home-grown brands will get better traction to scale. “The Indian diaspora across the world is a potential catchment, especially through online platforms and apps. The challenge here is to work out the systems and logistics to ensure timely availability and service at a reasonable cost,” he says.

Being around each other all day long has only helped strengthen the bond between the entrepreneurial couple. “There is huge trust and respect. That is the foundation.” For many, bringing work home is a huge no-no. In Lal and Rai’s case, there’s no escaping it. “Since we are spouses, the danger is to carry home issues from work. We do that sometimes and it gets stressful,” says Lal. “However, for the most part we have managed quite well.”

This story was originally published in the November 2019 issue of the magazine.