The FMCG major in a presentation circulated internally has acknowledged that more than 60 percent of its products do not meet recognised definition of health.

The spectre of ‘unhealthy foods’ is back to haunt Nestle again, this time globally. One of the largest food companies in the world and the maker of popular brands in India such as Maggi and KitKat has been cast in a negative light after (inadvertently) admitting that it has a large share of ‘unhealthy products’ in its portfolio.

If you are wondering what the fuss is about, here are answers to five big questions on the episode, including the potential implication on the company’s Indian unit.

What is the row all about?

Nestle in a document circulated internally has acknowledged that more than 60 percent of its products do not meet the “recognised definition of health” and that some of its products “will never be healthy no matter how much the company renovates,” reported the Financial Times.

According to the UK-based newspaper, the presentation was circulated internally among the company’s top executives earlier this year and said only 37 percent of Nestle’s food and beverages by revenues, excluding products such as pet food and specialised medical nutrition, achieve a rating above 3.5 under Australia’s health star rating system.

Even within its overall food and drink portfolio, about 70 percent of food products failed to meet that threshold, along with 96 percent of beverages — excluding pure coffee — and 99 percent of confectionery and ice cream portfolio, as per the report.

The rating system is used in research by international groups such as the Access to Nutrition Foundation.

Ouch! What does Nestle have to say about this revelation?

After the report surfaced, Nestle S.A released a statement saying that it is working on a company-wide project to update nutrition and health strategy.

“We are looking at our entire portfolio across the different phases of people’s lives to ensure our products are helping meet their nutritional needs and supporting a balanced diet,” said a Nestle S.A spokesperson.

The company in its statement cited its efforts to improve the nutritional footprint of its products. “For example, we have reduced the sugar and sodium in our products significantly in the past two decades, about 14-15 percent in the past 7 years alone.”

“About half of our sales are not covered by these systems. That includes categories such as infant nutrition, specialised health products, and pet food, which follow regulated nutrition standards,” the spokesperson said.

The company’s Indian unit also has released a statement on the controversy.

“Nestle India believes that nutrition is a fundamental need and the food industry has a vital role to play in enabling healthier lives. Driven by our purpose, we are constantly striving to increase the nutrient profile of our products, as well as innovate with new and nutritious offerings,” said a Nestle India Spokesperson.

Hmm … will the development have an impact on the company’s Indian unit?

According to analysts, given that Nestle’s India portfolio is quite different from its parent company, the development will not have much of an impact here.

“Given that Nestle has not positioned its products such as Maggi in the health category there is no change in the perception towards its brand with the recent development,” says an analyst at a top brokerage firm.

Out of Nestle’s 35 billionaire brands, only nine have a presence in India. Its brands such as DiGiorno croissant crust pizza, Hot Pockets pepperoni pizza, San Pellegrino drink, and Nesquik with the worst scores, as mentioned in the Financial Times report, are not present in India.

“Indian portfolio is different from the parent company’s as it is a small sub-set with a lot of localisation for country-specific needs. Also, India is one of the few countries which has had a local research and development facility for a long time,” said Abneesh Roy, Executive Vice-President, Edelweiss Financial Services.

Besides this, Nestle India has a higher share of milk and value-added milk products in its sales mix, which bodes well for the company say analysts given that milk has a high nutritional quotient. Last year, the company drew over 46 percent of its sales from milk and nutrition products, higher than prepared dishes which includes Maggi noodles (shown in the chart below). Volume growth, however, is driven by prepared dishes. Its initiatives in the country towards introducing atta, spinach variants of Maggi noodles, fruit and nuts to chocolates and reducing sugar and salt content are being seen as an effort to increase the health quotient in its products, by analysts.

Devangshu Dutta, chief executive at retail consultancy Third Eyesight is of opinion that India usually remains unimpacted by developments in these multinationals globally as there is lower sensitivity and awareness in the country. “Take, for example, veganism which is a huge trend in the West but has not caught on as much in India yet.”

He believes the country would eventually be impacted by these developments but not immediately.

What is the real significance of this controversy? 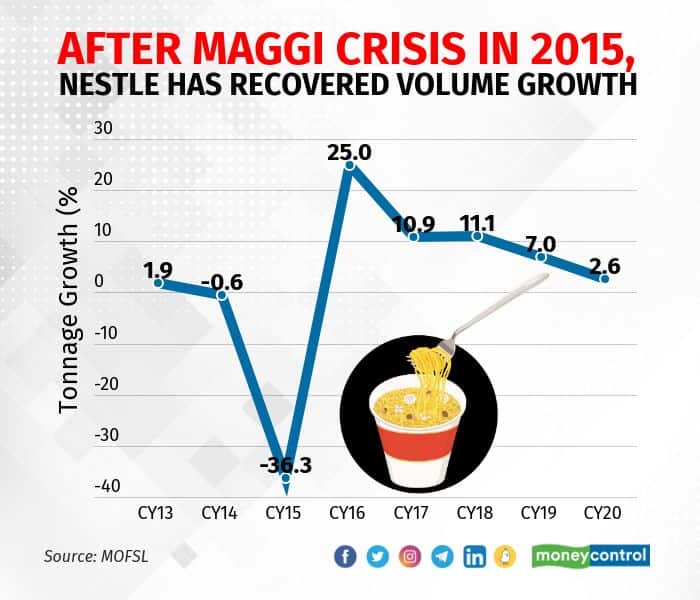 Nestle has come under fire in the past because of concerns about its food products. Back in 2015, Nestle had landed in trouble after Maggi, its most popular product in the country, was found to have monosodium glutamate or MSG by the Food Safety and Standards Authority of India (FSSAI). In a major setback for the company, the food safety regulator had consequently banned the sale of the product in the country. Maggi then commanded over 80 percent of the market share in India. Nestle’s volumes had plunged sharply in 2015 due to the Maggi crisis. (as shown in the chart below).

Subsequently, after five months of legal battle, Nestle relaunched Maggi in the country, however, it resulted in the loss of some of its market share. Today, the company holds almost 60 percent market share in the instant noodles category, as per estimates.

In the light of these events, the recent controversy around its product portfolio becomes significant as Nestle cannot afford a repeat.