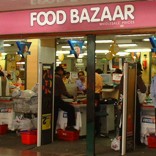 Last year, Kishore Biyani’s Future Group closed about 40% of its food and grocery chain of Food Bazaar stores that were not performing well, even as it continues to undergo restructuring in neighbourhood stores, KB’s FairPrice and the home-furnishing chain, HomeTown, apart from Food Bazaar.

While Future Retail (FRL) shut down 18 supermarkets, it opened only one store last year. At the end of December, the company had 26 stores. With a cut in consumption spends resulting in slowing same store sales growth — at 3.3% in the three months to December — and rising cost of operations, FRL is revamping the food and grocery space now.

The company is currently renovating existing stores in terms of design and product mix by exiting slow-moving categories, going in for visual appeal. The format is also allocating space for categories that have higher margins, for example in-house bakery.

At the end of December, Future Retail had a total debt of R5,065 crore. The company raked in revenue of R2,200 crore, with a net profit of R20 crore in the December quarter. These numbers are not comparable. Future Retail did not respond to an email seeking details on its format.

Food and grocery retailing, which forms the largest chunk of organised retail, is a tough business to be in. Food and grocery typically has a gross margin of 10-15%, compared to 40-50% for apparels. “Supermarket chains are struggling to create a profitable model. At the store level, it can take 12-18 months to break-even but is taking much longer now,” says Devangshu Dutta, chief executive of retail consultancy Third Eyesight.

With many challenges at hand, retail baron Biyani has been equally ruthless with his other food and grocery chain — KB’s Fairprice — closing about 35 stores of the neighbourhood grocery store format last year. Most of these stores are from the Big Apple chain of food and grocery stores in New Delhi that the group acquired in 2012. The company closed these stores as they were not profitable and were located in more expensive locations, thereby increasing rental costs. At present, the company has a total of 175 Fairprice stores.

According to Fairprice CEO K Radhakrishnan, “The company is now repositioning itself for the lower-middle class segment. We are not keen on serving the same customer who also goes to a supermarket or a hypermarket. We want to go one level lower to the lower-lower middle class.”

“We are making some changes in our new stores that will have a self-service option, with better visual appeal and systematic stacking of products,” he said.

Apart from these two food and grocery formats, the company is also revamping the HomeTown format by streamlining its supply chain management and exiting categories like heavy furnishing. “The format will be in a position to be profitable at the Ebitda level next year," according to Future Group president (retail strategy) Rajan Malhotra. This comes after FRL managed to turnaround its eZone format last year that turned Ebitda positive in the April-June 2013 quarter.

The rejig in the formats follow a big-bang round of restructuring where Biyani sold Pantaloons to Aditya Birla Nuvo in 2012, divested a 53% stake in consumer finance company Future Capital Holdings and signed term sheets to exit both the insurance businesses of Future Generali India Life Insurance and Future Generali India General Insurance.