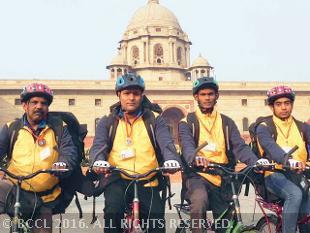 Amazon is running a pilot programme on delivering packages in India’s biggest cities over distances of 3-5 km — by bicycle. It was debuted in Mumbai last month and has been expanded to Bengaluru, Hyderabad, Delhi and Chennai. The programme is set to be extended to more cities.

"Being conscious of the environment we live in, reducing carbon footprint is the need of the hour," said Samuel Thomas, director, transportation, Amazon India. "We have taken this eco-friendly step by introducing bicycle deliveries, which also helps delivery associates with easier access in congested metro cities."

The couriers ride geared bikes and carry packages of up to 7.5 kg per trip. With incentives, a bicycle messenger could earn about Rs 7,000 to Rs 8,500 a month compared with Rs 14,000 a month for those on motorbikes, according to people aware of compensation levels.

Online retail, which is being increasingly adopted by Indian shoppers, is expected to account for 3% of the total by 2020, according to a PwC report. Further, orders per million are expected to more than double from five million in 2013 to 12 million by 2016. While this will mean more opportunities for e-commerce companies, delivery staff will have to ensure goods reach buyers in time.

The US-based online retailer is working on novel methods of delivery, including Prime Air, "designed to safely get packages to customers in 30 minutes or less using small unmanned aerial vehicles, also called drones," according to its website.

"In India, the density of population is higher, hence bicycles will help them reduce cost compared to motorcycles. Similarly, in the US, since the market is less dense, air cargos will help them reduce cost, reduce time and improve accuracy," said Devangshu Dutta, chief executive officer of consultant Third Eyesight. "The purpose is the same, how it is done is different, depending on the geography." Amazon said using cycles was green and enabled couriers to slip through traffic easier, when asked whether this would allow it to lower costs.

"Our focus for this initiative was two pronged – to be eco-friendly and to be able to cut through congestion in metro cities," it said. "You’ll find more people who own bicycles or if need be can afford to purchase one. It is lighter on the pocket to own a bicycle compared to a bike. We will see how it goes with Amazon with respect to safety and then decide whether we want to add bicycles to our fleet or not," said Vijay Ghadge, chief operating officer of GoJavas, primary logistics arm of e-tailer Jabong.

(Published in The Economic Times and The Times of India)